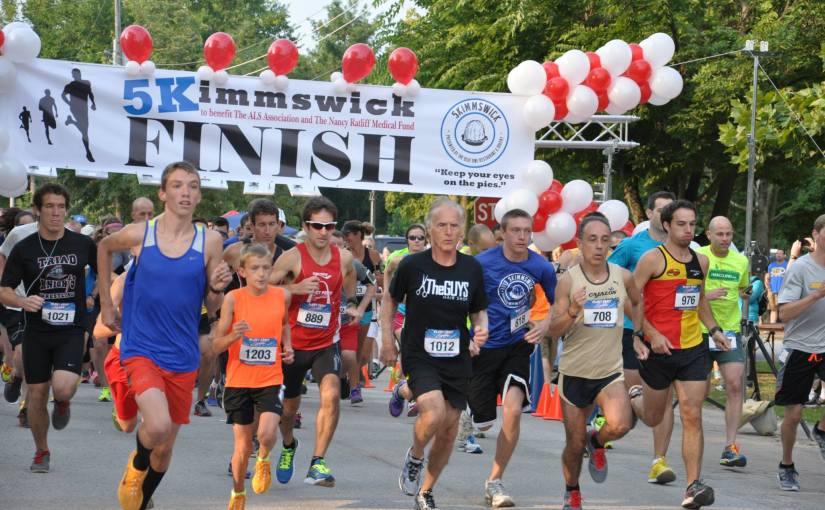 The Kimmswick 5K is held in memory of Nancy Ratliff, who touched many people’s lives as a daycare teacher and director, Montessori school teacher, dedicated wife and profoundly loving mother, grandmother and friend.

Our family was turned upside down in the summer of 2009 when, at the age of 61, Nancy was diagnosed with ALS.

We watched helplessly as the disease quickly and cruelly ravaged Nancy’s body, leaving her unable to use her limbs, eat, drink or even breathe on her own. Within a year, she was completely paralyzed, reliant on eye movement alone to communicate, a ventilator to breathe and a feeding tube to eat – her mind tortuously trapped inside her body.

Nancy battled ALS for nearly seven years before passing away on May 4, 2016. She continued to touch lives throughout those seven years and still does today through the Kimmswick 5K.

After raising funds for The ALS Association via the organization’s annual Walk to Defeat ALS® for two years, we were compelled by the devastation of the disease to make a larger commitment to raising awareness about it and raising money to help put an end to it. And so the Kimmswick 5K was born.

The Blue Owl Restaurant and Bakery has been an institution in Kimmswick – and a destination for those in the St. Louis area and beyond – since it was founded by Mary Hostetter in 1985. In addition to growing as a business – from serving 30 customers a day in 1985 to over 300 per day now – the Blue Owl has also become known for its active role in fundraising and philanthropy in the community.

As a long-time patron of The Blue Owl, Nancy wasn’t treated like a customer, but as a friend or family member. Nancy’s daughter Heather worked at the restaurant when she was in high school, and the Blue Owl hosted Nancy’s surprise 60th birthday party in August of 2008, just months before she was diagnosed with ALS. So when we approached Mary about the possibility of teaming up to do a fundraiser, it was no surprise that she and her daughter Kim jumped at the opportunity. Nor was it a surprise that they played an integral part in making it such a success.

THE GROWTH OF THE EVENT

We had no idea what to expect for our first year, and we were overwhelmed by the cooperation of the community and the turnout of the participants. We had been told that, as a community 5K, we’d be lucky to draw 150-200 participants in the first year. We were also advised that once we were two weeks from the race, we could estimate the number of participants we’d have by doubling the number of registrations we had at that point. So when we got within two weeks of our first race day and already had 250 registrations, we had to put in an emergency order for more T-shirts and adjust our expectations and plans accordingly. We ended up with over 500 participants in our first year.

Since Nancy passed away in 2016, our family has gradually, and gratefully, passed the event on to the St. Louis chapter of The ALS Association, and we look forward to the continued growth of the Kimmswick 5K and the amount of money that we can raise to help fight ALS.

Jason Ratliff is the son of Nancy and Gregg Ratliff, and is the senior editor for Major League Baseball.  He and his sister Heather, brother Brett, and father Gregg remain actively involved in support of people and families living with ALS, as well as the Kimmswick 5k.

Sign up today for the Kimmswick 5k and 1 mile fun run and join the fight against ALS!