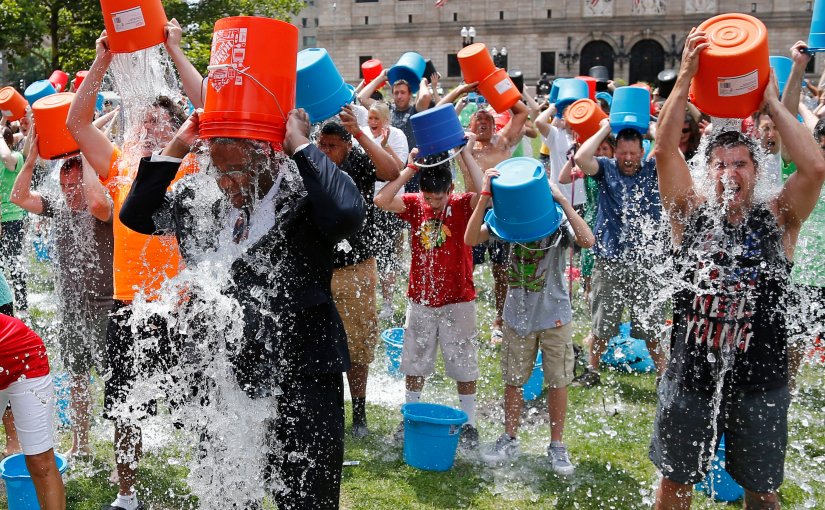 LeBron James did it. Bill Gates did it. Oprah, Steven Spielberg and President George W. Bush did it. But the majority of people who took the ALS Ice Bucket Challenge in 2014 were not celebrities, just ordinary folks who got caught up in the fun of nominating friends and family on social media to be doused in water and ice for a good cause.  It’s safe to say, however, that there was definitely another reason why the Ice Bucket Challenge gained traction. ALS is a relentless disease that takes away a person’s ability to move, walk, talk, and breathe on their own and keeps them trapped in their body. To watch someone you know go through this is absolutely devastating, and knowing that there is no cure can sometimes make people feel both helpless and hopeless. For the thousands of individuals affected by ALS, this painful reality was fuel for action that inspired a community of people to come together four years ago to create the original ALS Ice Bucket Challenge.

What followed from this largest viral social media movement of all time was not just news feeds packed with ice bucket challenge videos, but real and meaningful impact for people with ALS – and for researchers searching for treatments and a cure.  The effects of the ALS Ice Bucket Challenge continue to be felt in the ALS community.

Last year, breakthroughs in ALS-specific research were remarkable and inspired the ALS community. Radicava, the first treatment approved for ALS in 20 years, is now actively being administered to patients diagnosed with the disease, in the hope of decreasing the progression of the disease. The discovery of new genes will help to determine the root of ALS development. Partnerships with ALS ONE and NeuroLINCS for antisense drug clinical trials, along with the numerous other clinical trials, is pivotal to ALS research and the possibility of finding a cure.

Read more about how the Ice Bucket Challenge started and how it helped.

Moving forward this year,  Project Revoice, an initiative to give people with ALS their voices back, was launched. Thanks to a partnership with Lyrebird and advancements in voice technology, it is now possible to recreate the unique essence of the voice people with ALS had before diagnosis to use with Augmented/Alternative Communication (AAC) devices. All that’s needed is a couple of hours of voice recordings. Pat Quinn, co-founder of the ALS Ice Bucket Challenge, replaced the computerized voice on his AAC devices using past footage and voice recordings. Now, he has taken his voice back from ALS.

In order to synthesize more voices in the future, Project Revoice will provide a voice bank where people can store recordings necessary for the voice recreation before it’s gone, which will be available later this year. People with ALS can sign up to receive notifications and updates on voice banking.

ALS Advocates have also taken their efforts to Capitol Hill, working to get legislator’s attention directed toward disability insurance access and removing the five month waiting period to receive SSDI benefits. More than 500 ALS Advocates flooded Capitol Hill on May 15, 2018, to cultivate support for the Act and continued funding for ALS research from Center for Disease Control and Prevention’s National ALS Registry, the Department of Defense’s ALS Research Program, and National Institutes of Health.

Although the ALS Ice Bucket Challenge helped fund important research breakthroughs, it is also part of the Association’s mission to help people live their lives as normal as possible. We understand the need to support people living with ALS now as well as finding a cure for the future.

In 2017, donations to our Chapter made it possible for us to help over 700 people with ALS and for their families to receive guidance and support from a care services coordinator. Caregiver relief grants were provided for temporary in-home care to caregivers in need of a break, nutritional supplements were given to people with ALS who can no longer chew or swallow, and counseling was provided for people with ALS and their spouses and children. Additionally, because of our generous supporters, we were able to maintain our relationships with clinics helping patients through multidisciplinary teams at the ALS Association’s Certified Treatment Center of Excellence at Saint Louis University, The ALS Treatment Center at St. Francis Medical Center in Cape Girardeau, the John A. Cochran VA Medical Center, and the Neuromuscular Clinic at Washington University School of Medicine.

So this August, and every August until a cure, we’re asking you to fight this disease and to participate, advocate or donate to help support people with ALS and their families.

It is also vital to continue the conversation about ALS, including support for families, the need for research, and what a difference the Ice Bucket Challenge made. Spread the word to your friends and post using #EveryAugustUntilaCure on your social media accounts.

Thank you to all of you who participated in the ALS Ice Bucket Challenge of 2014 (and in subsequent years).  You have truly changed the course of this disease forever. We’re grateful for your support of people and families fighting ALS!

Learn more about ALS at www.alsa-stl.org.