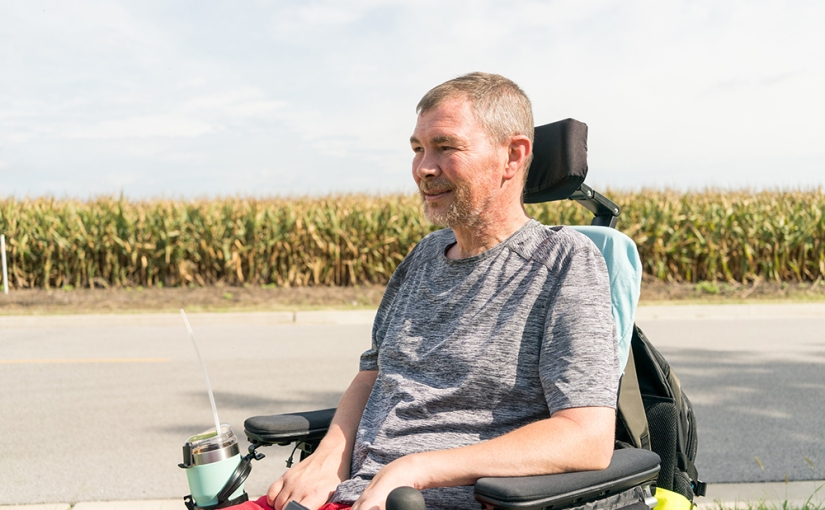 In early 2016, Sean Nolan thought it might be time to amp up his workouts.  The 46-year-old was feeling more tired than usual and experiencing some overall weakness.  “I didn’t think anything of it,” he says.  “I just thought I needed to go to the gym more.”

Months later, after his step daughter Jaylin pointed out some twitching in his arm, Sean noticed that his right hand was noticeably weaker.  When he told his primary care physician about his symptoms at a routine physical, the doctor immediately referred him to a neurologist.  Alarmed, Sean’s girlfriend of eight years, Nikki, started researching Sean’s symptoms online. Up popped sites describing ALS. “I panicked,” she says.  But Sean was not convinced.  “Everything I’ve read says that I’m an atypical age.  The average age for people with ALS is mid-50’s.  I’m ten years younger than that.”

Although Sean may not have been in the age range typical for someone with ALS, he did fall into another category of the population with a higher incidence of ALS – military veterans.  Sean had served in the army during the Persian Gulf War.

Sean and Nikki made an appointment at the ALS Certified Center of Excellence at Saint Louis University, and Sean underwent extensive testing with neurologist Dr. Ghazala Hayat.  Nikki recalls receiving the devastating news.  “When Dr. Hayat had finished testing, you could just see the look on her face.  She looked so distraught. She said, ‘It’s not good,’ and it hit me then.”

With five children between them, Sean and Nikki are facing ALS and their future together as a family. Shortly after the diagnosis, the two got married, and are living with 15-year-old Jaylin and 13-year-old Jackson in their Mascoutah, Illinois home.  Sean’s parents moved from Wyoming last year to help care for Sean, who has lost his ability to walk and spends his days in a motorized wheelchair.

“Physically, I’ve slowed down a lot,” Sean says. But despite the physical limitations brought on by ALS, Sean continues to serve his country.  Now receiving specialized ALS multidisciplinary care at the John Cochran VA Hospital (in partnership with the ALS Association), Sean leads a group that helps other veterans with ALS learn to operate speech generating devices after they lose their voice to the disease.  “He’ll be using one himself soon,” Nikki says.  “He is getting harder and harder to understand.”

Sean is tireless in his efforts to create awareness about ALS and the increased incidence of the disease among veterans. He recently underwent a two-day training to become an ALS Research Ambassador to educate others with ALS as well as the public about the importance of clinical trials and ALS research.

Just a couple of months ago, Sean and Nikki opened their home to photographer Sarah Howell, of Sarah E Studios, to document a late summer morning and give people an idea of what a day in the life of a family living with ALS really looks like.  Their Saturday morning looks a lot like any other family might experience, but with one major difference.

The resulting images, some of which are included below, capture those moments. There is also a slideshow video with these images that you can view here.

Thank you to the Nolan family for opening their home and sharing their journey with us.  This Veteran’s Day we pay tribute to Sean and the many other veterans who returned home safely from their service only to be faced with a different kind of battle entirely.

To learn more about ALS and the military, along with links to resources and tools for veterans and their families, please visit our website.  And, if you are a veteran with ALS, or a survivor of someone with ALS, we encourage you to visit our Roll Call of Veterans Wall of Honor and share your story of courage.

Many thanks to Sarah Howell/ © Sarah E Studios for helping to tell the stories of families living with an ALS diagnosis through her amazing images.  Visit her page at www.sarahestudios.com.