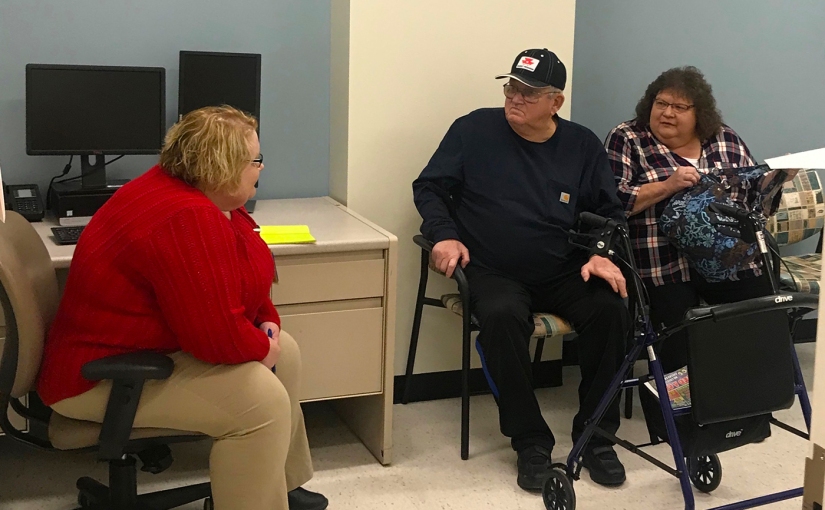 Anndee Glick, MSN, RN, ANP-BC, is a nurse practitioner and clinical coordinator at the VA St. Louis, John Cochran Division’s ALS Multidisciplinary Care Clinic.  During a recent Veteran’s Day recognition ceremony honoring veterans with ALS, Anndee addressed the audience of military heroes and their families. Following is the text of her speech.

“When I started taking prerequisites for my nursing program in the spring of 1998, my idea about what a nurse was and did were mostly learned by watching Major Margaret Houlihan from “MASH”.  What I  didn’t know when I enrolled in nursing school was that I had enlisted in Colonel Joyce Taylor’s Army.  Colonel Taylor, known to me as Doctor Taylor, had served in a real-life “MASH” Unit during Desert Storm.  The lady that I came to know as Joyce became my friend, mentor, and role model in nursing.

Dr. Taylor was a nursing faculty member who was ahead of her time.  She loved educational technology and incorporated PowerPoint and the internet into the classroom long before online college courses were even imagined.  In addition to sharing innovation, she lived and taught the core values of nursing that all nurses should embody: human dignity, caring, and compassion.  She led by example and was never afraid to take on the most menial jobs in nursing.

Joyce also brought out the best in people.  She challenged us to be better and gave us assignments that let us develop into nurses that would be worthy of caring for the most challenging patients.  She also taught what she called the “niceties”of nursing, the little caring touches that made health care personalized and preserved peoples’ dignity.  Joyce became a recipient of nursing care herself. After surviving her first battle of breast cancer, she had a recurrence that claimed her life in the spring of 2003. Before she died, I was able to tell her that I would not have been a nurse if it hadn’t been for her.

My first experience with the VA was at the Central Arkansas Veteran’s Health Care System in Little Rock.  I was chosen for a prestigious program called VALOR, VA Learning Opportunities Residency.  Unlike many of my classmates, I didn’t have clinicals assigned at the VA Hospital, so this was my first experience working specifically with veterans.  I saw the good and the bad.

I discovered that I had three veterans on my assignment that had ALS and wondered how this could be possible, wasn’t ALS supposed to be a rare disease?

After my experience with the VALOR Program I returned to the VA for nurse practitioner training.  I worked with several experienced nurse practitioners here at the St. Louis VA and returned to the VA in 2011 to work in Home Based Primary Care.  I discovered that I had three veterans on my assignment that had ALS and wondered how this could be possible, wasn’t ALS supposed to be a rare disease?  My textbook quoted a prevalence of 1 in 400,000 people.  I didn’t understand how ALS could be so rare but I had three patients with it on one assignment.  Through those three patients, I learned about the courage that it takes to battle this ugly monster.  Now the prevalence of ALS is thought to be about one in four hundred.

In working with those three home bound patients with ALS, I encountered Tara Klucker for the first time.  She somehow got my cell phone number and started calling me and asking me questions about benefits and equipment for my ALS patients. It was several years before I met Tara in person, but I knew she and the ALS Association were advocates for the veterans with ALS.  Later that year, Tara invited me to come to a workshop that the ALS Association was sponsoring in Cape Girardeau.  The workshop was geared for ALS patients and their families.  I saw the courage of many people using motorized scooters and portable ventilators that had come on a Saturday to learn more about their disease.

In 2016, I interviewed for a position with the Neurology Section at the VA.  When I went in for the interview, I thought it was for universal nurse practitioner duties. When I learned that this position would also be coordinating the ALS Clinic, I was hooked!  The possibilities were endless.

We use the term, “ICARE” at the VA.  There are some posters that advertise it and some staff members wear lapel pins.  Here is what ICARE stands for:

I:  INTEGRITY We know that there have been some challenges with integrity in the history of VA, we are working to correct those problems and hold VA employees to a higher standard.

C: COMMITMENT When you visit the VA, we expect a level of service that demonstrates that our employees are committed to providing you with the best care.

A:  ADVOCACY Know that every employee at the VA partners with you to advocate for the care that you need.

E:  EXCELLENCE We know that there are many choices for providers in health care.  There is some talk of privatizing health care for our veterans.  At the VA, and especially in our ALS Clinic, we want to be your provider of choice.  In other words, we don’t want you to have the mindset that you HAVE to get all of your ALS Care at the VA, we want you to CHOOSE to receive your care here.

Thank you for your attention today and thank you for the words of encouragement that you give us.  You are truly the reason that we do the work we do.  It is my honor and privilege to come to work at the VA every day knowing that my work is more than a job. Patch Adams, a doctor who teaches us to bring humanity back into healthcare, said, ‘When you treat a disease, you sometimes win.  When you treat people, you ALWAYS win.’  Thank you for putting your trust into us.”

The VA St. Louis, John Cochran Division, in partnership with The ALS Association St. Louis Regional Chapter, has operated a multidisciplinary ALS clinic since May, 2017.  This partnership was created to better serve our nation’s heroes, who are twice as likely as the general public to die from ALS.

For more information on ALS and the military, please click this link.

One thought on “Anndee Glick: Caring for our Heroes with ALS”