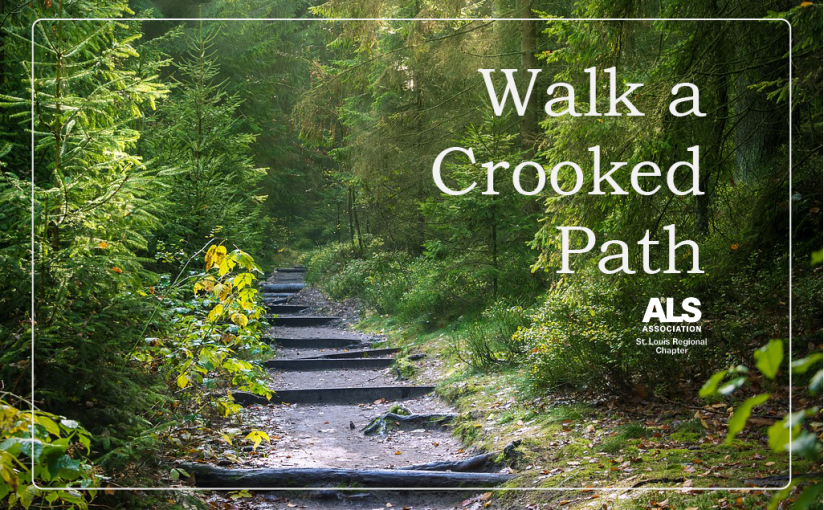 Not so long ago in a land not so far away lived a brave, strong man and his white-haired wife.  They loved their little blue cottage on the hill.  They loved playing with their grandchildren, going for long bicycle rides, and camping – especially camping!

One day, life was going along much as normal, when there came a knock on the door.  When the brave, strong man went to answer, there on the porch stood a big, ugly, horrible wolf.  On the front of his sweatshirt were the letters “ALS.”  The man didn’t know what that meant, but he knew the creature was one of the ugliest things he had ever seen!  Right behind the wolf were three bears.  Big bears.  Scary bears.

The wolf said he wanted to come in and live with the brave, strong man and his white-haired wife, but the man didn’t like that idea at all.  When he tried to shut the door in the wolf’s face, the first bear spoke up.  “I know ALS looks terribly ugly and scary, but he’ll be easier to live with if you let us move in, too.  My name is Change.  The second bear’s name is Frustration.  And the third bear is Insensitivity.”  The man thought about it for a moment, but before he could stop them, the wolf and the bears had moved into the cozy little blue house on the hill.

Just days after the not-so-welcome visitors arrived, the man was getting dressed in the morning.  For some reason, he wasn’t able to button his shirt.  His hands were clumsy, and the buttons refused to go through the holes.  He called his wife and told her the problem.  About that time, Change popped his head through the door.  “Oh, yes.  That’s one of the things that comes when ALS moves in.  Everything changes!”  Change went on speaking to the frightened couple.  “If you learn to bear with change, find new ways to do things, be inventive, you’ll find ALS much easier to deal with.”  Sounded like good advice to the couple, and they decided to take him up on it.  The white-haired lady researched, studied and read to find ways to make things easier for her brave, strong husband.

Not long after, the lady heard the man grumbling in the other room.  She rushed in to check on him, knowing for certain something was wrong.  When she walked up, he was embarrassed that she had caught him mid-complaint.  “What’s wrong, sweet man”, she asked.  “I was able to change the TV remote yesterday, but today I can’t get my hands to obey me.”  Through the door walked Frustration.  “Ah, yes,” he said.  “It’s frustrating to accept the fact that you can do something one day, and by the next day that ability is gone.”  Frustration went on to tell the man and his wife that ALS would be easier to live with if they understood that there were going to be times when life would become very frustrating.  They could either rail, rave and rant at the frustrations, or they could learn to bear them.  A lot of dealing with a bad situation is your attitude toward that situation and the ones who are helping you navigate the path.  Practice patience.  Be kind.  Forgive the mistakes.

As the days, weeks, months, and, finally, years passed, the brave, strong man became more and more under the cruel control of ALS.  He still had a sweet attitude, and his heart was pure, happy and filled with God things, but he could no longer walk, talk, feed himself, bathe, dress – or any other of many things that he had taken for granted.  The couple grew closer and closer in their love for each other, and their hearts became solidly knit together.

Friends and family would come and go.  Some were good to ask questions about how they could help.  Some would bring in meals.  Some would stay with the brave, strong man while the woman left for a couple hours to run errands.  The Big Bad Wolf, ALS, was always present, but Change, Frustration, and Insensitivity would retire to a corner somewhere to wait until guests were gone.  Usually.  Occasionally, a guest would feel free to offer unsolicited advice, tell the brave, strong man how he could better his situation.  Instruct the white-haired lady as to the things she was doing “wrong” in the care of her husband.  The words would sting.  The man and woman would drop their heads as they tried to bear the barrage of words.  But out of the corner would step the bear, Insensitivity.  He would walk up to the couple, shield them with his big, bear arms, and remind them that some people didn’t really understand their circumstances.  Some people were unkind and insensitive without meaning to be.  The brave, strong man and his white-haired wife would try to smile, and the Bear Insensitivity wrapped his strong arms even tighter.

I hope you’re getting the point of this story.  ALS is a horribly frightening house guest.  But there are things you can do to make it easier on the caregiver and easier on the patients.  Don’t point out every change that takes place.  Change is going to come.  Deal with it as it comes.  Frustration and anger only serve to sap your strength and your joy.  It’s perfectly natural to get frustrated when you see your abilities dropping off like a snake’s old skin.  But don’t live there.  The caregiver and the patient can learn to encourage each other.  Sometimes the hardest thing to take is the insensitivity of others.  It’s important to remember that, even though they think they know, they really have no idea what you go through on a daily basis.  It may become necessary to tell well-meaning friends and family that offer too much advice that you will need to work it out on your own in order to find out what works best for you.

It’s a crooked path, and you may occasionally fall, wander off the path, or get too exhausted to take another step, but I have faith in you.  Together, caregiver and patient,  you can make the journey – walking the crooked path.

Today’s blog post is part of a recurring monthly series from our good friend Saundra Stewart. When her husband, Don, was diagnosed with ALS, Saundra became his full-time caregiver for over 10 years. In her series, “Walk a Crooked Path”, Saundra shares her insights on ALS as a caregiver.

One thought on “Walk a Crooked Path: The Big Bad Wolf and the Three Bears”