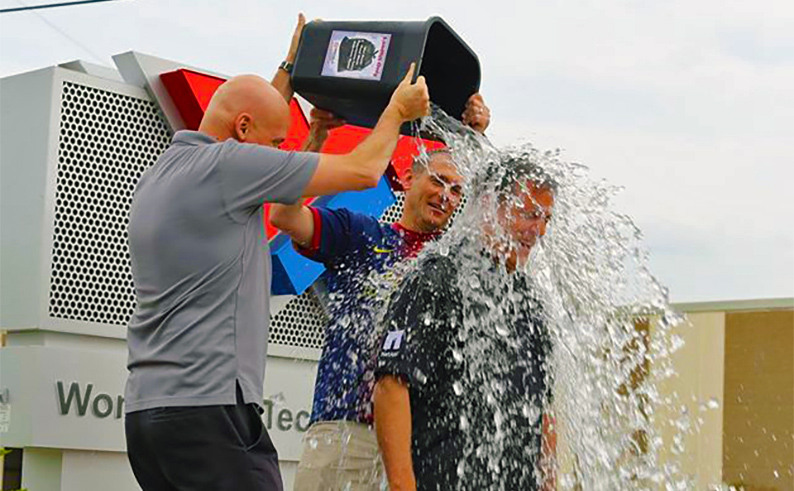 It was the summer of 2014, and in St. Louis it was hot—nothing unusual about that. What was unusual was that people from all walks of life were pouring buckets of ice all over their heads. And not just to cool down, but for a cause. And it wasn’t just happening in St. Louis, but across the country, and even the world.

This was, of course, the Ice Bucket Challenge, the viral video phenomenon that took over social media and raised awareness—and over $115 million—for ALS.

The ALS Association St. Louis Regional Chapter was swept up in the phenomenon just like everybody else. People, companies and organizations across the region were taking the challenge. Some we knew already, most we didn’t, but with every new video and donation, the whirlwind of “that summer” got wilder and wilder.

As more and more people took the Challenge and posted to social media, there became an opportunity to connect with those who had a story with ALS that we hadn’t known before. The Ice Bucket Challenge five years ago was beginning of many such stories, including that of World Wide Technology.

Part of the story between World Wide Technology and the ALS Association was (as is) proximity. Our offices are separate by less than half a mile. But despite being friendly neighbors, not much of a bond existed before 2014. But that was before someone decided to throw cold water on it.

Actually, not just someone, but someones. Jim Kavanaugh, Joe Koenig and Ann Marr from World Wide Technology all took the challenge that summer, spreading the Challenge to their networks.

“I have personal experience with ALS through a close friend that was diagnosed in 2013. Prior to his diagnosis, he was a former collegiate athlete and carried his passion for the sport into coaching his sons. ALS robbed him of everything,” says Koenig. “In addition to my personal experience, I’ve also witnessed the impact of ALS through the World Wide Technology team. Several employees have managed this disease with their family members. The ALS journey is tremendously difficult, and although progress is happening there is much more to be done.”

After reaching out to say thank you for taking the Challenge, we learned that one of those people at World Wide Technology with a personal connection to ALS was Bryan Thomas, who would eventually join the Association Board of Directors.

Also, after the Ice Bucket Challenge wound down, we wanted to find a way to say thank you to the entire community of being part of something we already realized was going to be transformative for people with ALS and their families. To remind people that they had done something more than just pour ice cold water on themselves, we partnered with our new friends at WWT, Graybar and Express Scripts to create at “thank you” billboard to the St. Louis community for taking part in the Challenge—and for the joining the fight for a cure.

The story of World Wide Technology and our Chapter is unique, but it is not solitary. We have other unique stories with individuals, organizations, and companies big and small. All who donated then and since have become part of something bigger than just themselves. The funds and time they have donated have become part of our story have helped the ALS Association locally and nationally become an organization that can and does think big—in terms of treatments and caregiving for those with ALS, in terms of research and testing in the search for treatments and a cure, and in terms of thinking how we can do more each and every day for people affected by this disease.