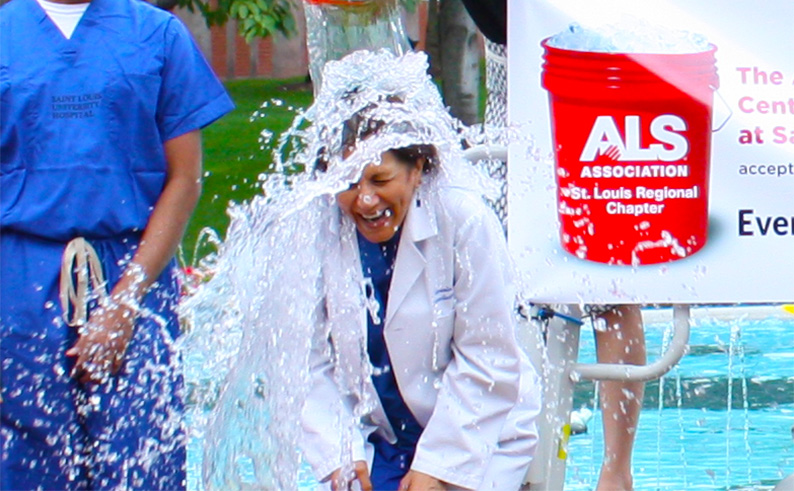 Five years ago, the ALS Ice Bucket Challenge was soaking the world and bringing unprecedented attention to ALS. Last week on ALS Connect, we looked back on some of the relationships with corporate partners the Ice Bucket Challenge started or grew for the ALS Association St. Louis Regional Chapter. But for those already on the front line of the fight to treat ALS, the Challenge had special meaning. It brought attention, and funding, to a disease that many had been working tirelessly on for years. Among those people are the many that work at ALS Multidisciplinary Clinics across our region.

Our Chapter partners with ALS clinics at Saint Louis University, Washington University School of Medicine, the John A. Cochran VA Medical Center, and St. Francis Medical Center in Cape Girardeau. We have also begun a relationship with Memorial Medical Center in Springfield, Illinois, to better serve people with ALS in that area. To get a feel for what the Challenge meant to someone working day in, day out to help people with ALS, we asked Dr. Ghazala Hayat, director of the ALS Certified Center of Excellence at Saint Louis University, about the Challenge and what it meant, and still means, for the clinic. Here’s what she had to say:

Question: When did you first hear about the Ice Bucket Challenge?

Answer: At the round table discussion at the end of the clinic. I was intrigued, but did not know much. Later on I read about how it was started by Jeanette Senerchia whose husband had ALS took the challenge from her cousin.

What do you remember about the Ice Bucket Challenge from 2014?

It was catching on so fast that I could not keep up. I was out of the country and my daughter who is a physician at St. Louis Children’s Hospital called me to let me know “your clinic has been Ice bucket challenged” by Washington University physicians. Many from our ALSA certified center of Excellence took the challenge, and the water was COLD!!!!

The funds collected were jaw dropping. Physicians treating other neurodegenerative disorders were asking how their organizations could mirror the “Ice Bucket Challenge” success.

Many from the SLU community took the Challenge. What was it like to have so much attention suddenly placed on a disease you’ve worked so hard on for many years?

It motivated the whole ALS team. The attention of the public was like a dream coming true. The public believed that this disorder needed funding for research and patient care. Patients felt as if the world was listening to them.

What impact did the Ice Bucket Challenge have on your work in the years after it happened?

The clinic is in better position to help people with ALS with clinical care and also has taken part in many research projects due to the Ice Bucket Challenge funding.

How have you been able to use the energy and attention from the Ice Bucket Challenge at your clinic?

The motivation and energy is there, a simple reminder gets the team fired up for taking part in different funding opportunities.

What surprised you about the reaction to the Ice Bucket Challenge from the medical community?

I believe the success of the challenge was communities around the country taking part in it. The medical community was a collaborator.

What do you wish people understood about ALS five years after the Ice Bucket Challenge?

We have taken many steps towards the right direction, but the challenges are still there. The efforts needed for a breakthrough treatment and/or pinpointing the etiology need much more and continuous funding.

Where do you think ALS treatment might be in five more years?

I feel confident that we will have the biomarkers and hopefully 2-3 more therapies in the market.

With the 5th Anniversary of the Ice Bucket Challenge, the ALS Association is asking everyone to say “Challenge Me” to do whatever they can to help finish the fight against ALS. What role can the SLU ALS Clinic play in challenging this disease?

Get our people with ALS, our ALS team and the St. Louis community reinvigorated by giving talks, and coming up with some innovative “branching” of the Ice bucket Challenge.

Thank you to Dr. Hayat, and to everyone from all the ALS Clinics in our region who took that Ice Bucket Challenge and who dedicate themselves to making a difference in the lives of people with ALS. As we remember the Challenge we hope the “branches” nourished by all that ice cold water continue to grow and spread towards new research discoveries and new treatments.