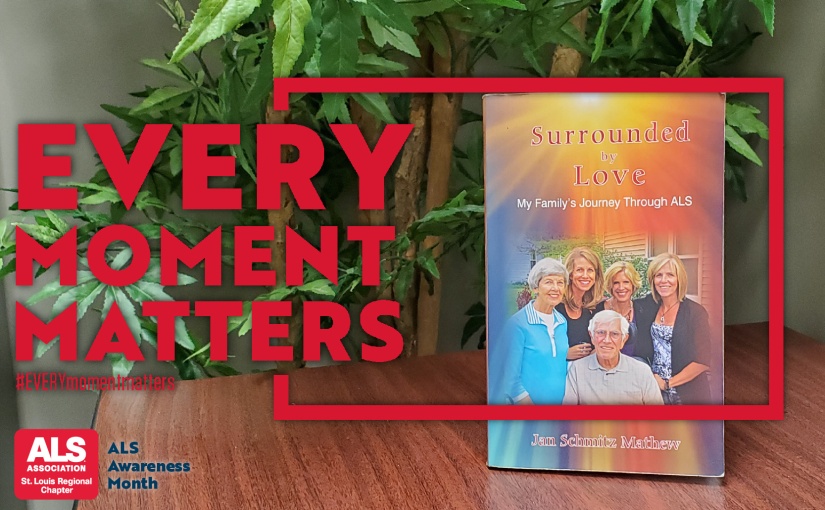 Jan Schmitz Mathew hadn’t really set out to write a book, but she is certainly comfortable with expressing herself through the written word. So when her father Roger began experiencing the symptoms of ALS in the fall of 2012, and after he was diagnosed in March 2013, she turned to writing. Rather obviously, at the time she was focused on her father, her mother, and the rest of her family—what was right in front of them. Her dad’s journey with ALS ended in October of that year, and while her writing continued, it was not yet time to think that maybe, just maybe, her experiences could have meaning for the larger ALS community.

“I’ve been a writer/editor for decades and, as such, ‘journaling’ has always come naturally to me as a way to express myself, or to process my feelings and experiences,” Jan says. “I started writing at the same time my dad began experiencing ALS symptoms; observations, notes, occasional essays, mostly as a way to wrap my head around what was happening.”

But after some time to reflect, and to mourn, the writer in Jan began to think that there was story worth telling here. Not just a story about ALS, but a story about a family. About life. A story that probably needed to be a book.

And so late last year, Jan published Surrounded by Love: My Family’s Journey Through ALS. The book is available from Corby Books and Amazon. She has pledged to donate her proceeds from the book to ALS families in need. Jan also has a special connection with our Chapter, having volunteered with us in the past. Her family is from southern Illinois and she currently resides in central Illinois.

Jan’s story of a family’s life and love has something for everyone, but the story of her father’s journey with ALS is especially powerful for the ALS community. Jan hopes the book can help other families that are facing or have faced ALS.

“My hope (is) that the book’s cover and title open to the story of a family’s best efforts in the face of an unimaginable disease; that love is ultimately stronger and more enduring than any disease or diagnosis,” Jan says, “and that it extends well beyond death; and that it is possible to emerge stronger, more loving, and more empathetic as a result of the journey.”

Still, any story that includes ALS is going to have some challenging content, both for the reader and the author. ALS is a devastating disease to all it touches, which Jan understood better than many. Writing the book meant again having to face ALS.

“In a nutshell, (it meant) reliving the experience of watching my dad’s decline and literally seeing him die from this disease,” Jan says. “I felt it was important to dig deep in terms of showing ALS rather than simply telling readers about it. For example, rather than write that ‘dad could no longer move his arms,’ I wanted to express how devastating the helplessness could be. So: Imagine laying completely still, unable to change positions, adjust your pillow, or scratch your nose. What does that feel like, night after night? What does it feel like to constantly depend on others for help with everything, all the time? I wanted to paint pictures throughout the book, so to speak.”

There was also the balance of telling a story of a life that includes ALS, but isn’t only ALS.

“The tone was also challenging. While there’s no sugar-coating ALS, I didn’t want Surrounded to be depressing, angry, maudlin, or cliché,” Jan says. “It was important, as my dad always said, to ‘cling to all that is good.’ In that spirit, I tried to look for the positive and for the blessings throughout what was truly a heartbreaking journey.”

The story Jan tells in a little under 200 pages of one family’s journey through ALS has seemed to resonate with many both inside and beyond the ALS community.

“I’ve been humbled and often moved to tears by reactions to Surrounded. Readers seem to appreciate an honest, personal and straightforward approach to my family’s journey and, simultaneously, a gateway to understanding more about the unique aspects of ALS, its progression, and the toll it takes on families and patients,” Jan says. “After finishing the book, many have also shared it with other families, or recommended it to those navigating the same path. For me, that makes this long labor of love well worth every minute.”